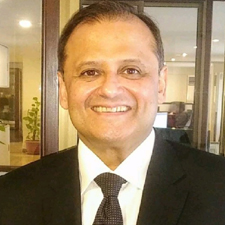 Roger Dawood Bayat, brings with him International Corporate experience spanning 30+ years. A proven Team leader and mentor, he is an effective communicator who has built an extensive network of notable contacts Globally. He consistently demonstrates entrepreneurial thinking and has the capacity to hold and pursue many ideas in parallel whilst achieving business excellence and deliverables in a short span of time. His strengths include the ability to originate and build business, develop the brand effectively and continue the process to reach its potential in the market place. His responsibilities include venture capital / private equity & forming strategic alliances.

Roger Dawood has been engaged with high profile assignments and most recognizable achievements include establishment of PE/VC in Pakistan in 2016/17. Being one of two entities to receive PE/VC License by the regulators (SECP) in Q4 2016 and subsequently in Q1 2017 launched the first ‘Pakistan Emerging Market Fund – 1’ approved by SECP with focus on high growth sectors that include Healthcare, Consumer, Education, Logistics and Real Estate.

In 2006 /7 he lead the team in the establishment of Emirates Global Islamic Bank (EGIB), the recipient of the 1st commercial license for Islamic Banking in Pakistan where Emirates Investments Group is the only non-banking entity to be licensed. EGIB commenced operations in February 2007, grew to 60 branches operating in 31 cities in 18 months & successfully merged it in November 2010 with a subsidiary of ABG Bahrain, to form Albaraka Bank Pakistan Ltd. that was hailed as ‘the first Islamic bank merger in the country’. .

Roger Dawood is an Angel Investor in startups based in Pakistan, UAE and USA.